Gulistan (October 12, 1813) and Turkmenchay (February 10, 1828) Agreements
which signed as a result of two wars made between Iran with Russia in 1813-
1828 years, have played a tragic role in the history of the Azerbaijani people and
caused the disintegration of Azerbaijan. The north of the Azerbaijan was ceded
to the management of Russia and its south was ceded to the management of Iran.
Iran started to make living Armenians emigrate collectively to Yerevan, Karabakh
and Nakhichevan in accordance with 15th proviso of the Treaty of Turkmenchay
Azerbaijani Turks who historically settled in this land was deprived of their own
homeland as a result of the application at issue.
Emperor Nicholas I signed a decree concerning being established of an “Armenian
province” in the lands of the khanates of Yerevan and shortly after the Treaty of
Turkmenchay on 21 March 1828. According to this decree, the city of Yerevan
where 7331 Azerbaijani Turks and 2369 Armenians lived at that time was included
in “Armenian province”. 40000 Iranian Armenians and 84600 Ottoman Armenians
were domiciled in the Southern Caucasus (Nakhchivan, Karabakh, Yerevan) in the
years between 1829-1830 as a result of the wars made with Ottoman (1828-1829,
1877-1878). Despite all this, Yerevan State (gubernatorluk-Russian) held third place
after Baku and Yelizavetopol (Ganja) states considering the number of Azerbaijani
Turks at the end of the 19th century.
The biggest disasters experienced in the history of Azerbaijan continued in 1905-
1907 and 1915-1920s, too and the repression (deportation, oppression) that started
in 1920s, lasted nearly 30 years happened. So much so that, hundreds of thousands of
innocent people were exposed to repressions, usually national self-recognition and
national government belief, not the dictatorship of the political regime, for thinking
with a national feeling as a result of the fact that totalitarian regimes committed
despotism and violence in accordance with the laws against the human rights in
the territory of Republic of Azerbaijan in those years.Making Azerbaijanis emigrate
from Armenia (from the West Azerbaijan) started in the 18th century and was built
in three stages:

During this time Armenians razed hundreds of settlements of Azerbaijanis living
in Western Azerbaijan, they demolished nearly 30000 houses and brutally killed
140000 people consisting of old people, children and women, made more than
750000 Azerbaijanis emigrate from Armenia (from the West Azerbaijan ). More than
220000 Azerbaijanis left their native lands where they were born and grew because
they couldn’t put up with the savagery of Armenians in 1988.
Keywords: Armenia, Azerbaijani Turks, the Erivan Khanate, “The Armenia without
Turks”, The Caucasus.

Yıldız Deveci Bozkuş – The Events of 1915 in Armenian History Textbooks 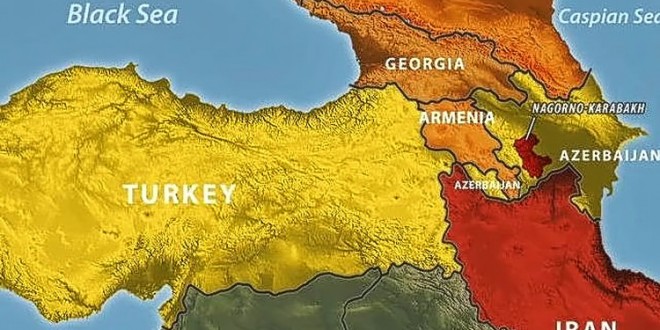